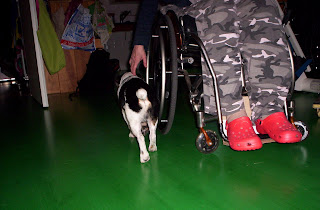 Been trying to work out how to deal with my new care routine. Difficult to write when my carer is here, she is here from 10.00 am til 14.00.

I find it particularly hard to write with someone hoovering near me it really puts me off. Mind you I also realised I was finding it even harder not to write. Really missing it and doing the podcasts.

Realize that its not just the new routine that is inhibiting my writing and the podcasts as I can easily write like crazy as soon as my carer has left at 14.00.

Problem is I often have spasms that scare the shit out of me so end up spending the time alone just concentrating on remainng sitting upright in my wheelchair. Often bending over holding on to the front of my chair for in case a nasty one flips me over the back of the chair.

Last night I decided that fear of spasms would not stop me writing and so at 15.20 I had rolled over to the pc to do just that. Meant to write til a good friend, Toos came round and then I hoped we would go out.

Sadly those plans did not happen instead I had a horrible spasm seconds after I nearly phoned Richie, as I had a funny feeling I might have one.

Didn't phone thought forget the feeling and shrugged it off and tried to get on with writing at that moment a spasm thrust my pelvis up out of the chair and before I could say or think anything I was hanging over the back of the chair.

Shit, shit shit there I was it was 15.30 my phones had fallen off my lap so I could not phone Richie and my friend Toos would not be here til 16.00.

Tried to remaiin calm easier when I have been able to phone Richie and know he is on his way. Today I kept a sort of calm broken by the odd shriek of help help help.

Toos was here 16.00 on the dot, sadly she does not have a key so she called Richie and left an urgent message on his voicemail.

Soon as he heard he called the house phone and left a message telling me he was on his way! What a relief to hear his voice and to know that he would be here within 15 mins.

By the time he got here there was a group of neighbours plus the police all milling around outside our door.

All in all I hung over the w/chair for 1 hour during which time I vomitted due to the horrible way I hang over the wheelchair. Getting skilled at vomitting in such a way as not to inhale the vomit and choke to death.

Finally my ordeal was over and my darling picked me up and got me sitting up again and Toos washed my face and got me some water to drink.

Now 2 hours later I am still in shock cos it was such an intense spasm as well as how scary it was to not be able to phone for help.

Really worried me not being able to phone so glad that Toos and I had a date to go out for coffee as Richie was not due back until 17.00.
Posted by Herrad at 5:53 PM

My word, how horrible for you, Herrad and that's an understatement..And the joy of writing picks you up again! Toos and Richie bravo...

Herrad, this is horrible....Toos and Richie bravo! The joy of writing...and despite the sheer hell you are going through...you write for us to open our eyes...thnx..a huge hug goes out to you...XXX

I am so cross to read this! Is there no emergency line that you can have? I have one and there is pendant that can go over your neck that you can press. Then the operator can do the calling for you - also to some who would have the house key. I thought if the house is built for disaabled this would be standard! Grrr! Carixxxxx

Cari is right-I had forgotten about the emergency pendant you can wear around your neck that when pressed will alert emergency services--is that not available where you are? Say it isn't so.