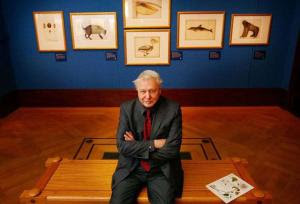 Attenborough: Genesis? It can go forth and multiply

The Bible is to blame for devastation of the planet, says Sir David Attenborough
By Steve Connor, Science editor of The Indepndent.
http://www.independent.co.uk/news/uk/home-news/attenborough-genesis-it-can-go-forth-and-multiply-1521668.html

Sir David Attenborough yesterday blamed the Book of Genesis for all number of environment ills, from deforestation to the extinction of species
He has romped with gorillas, turned his back on grizzly bears and found himself knee-deep in suffocating bat dung. After decades of getting to know the furthest-flung corners of the world – and its inhabitants – Sir David Attenborough has vented his ire on the Bible for promoting the belief that man has complete dominion over the Earth.
Sir David, probably the best-loved broadcaster and certainly the most distinguished television naturalist, has blamed the Book of Genesis for many environmental problems, from the burning down of tropical rainforests to the extinction of species.
On the eve of a BBC1 documentary on the life of Charles Darwin and his theory of evolution, Sir David has criticised the centuries-old idea running through the Judaeo-Christian tradition which assumes God gave the Earth to man to exploit and use in whatever way he saw fit in order to populate the world.
Sir David, 82, said the devastation of the environment has its roots in the first words that God supposedly uttered to humankind, as detailed in Genesis 1:28: "Be fruitful and multiply, and fill the earth and subdue it; and have dominion over the fish of the sea, and over the birds of the air, and over every living thing that moves upon the earth."
An atheist raised in an academic, non-religious family, Sir David said Genesis peddled untruths about how animals and plants appeared on earth and was also at the root of why there was now serious environmental degradation due to the greedy overexploitation of the earth's natural resources.
"The influence of the Book of Genesis, which says the Lord God said 'go forth and multiply' to Adam and Eve and 'the natural world is there for you to dominate', [is that] you have dominion over the animals and plants of the world," Sir David said.
"That basic notion, that the world is there for us and if it doesn't actually serve our purposes, it's dispensable, that has produced the devastation of vast areas of the land's surface.
"Of course it's a gross oversimplification, but that's why Darwinism, and the fact of evolution, is of great importance because it is that attitude which has led to the devastation of so much, and we are in the situation that we are in," he told the science journal Nature.
In tomorrow's documentary, Charles Darwin and the Tree of Life, Sir David does not mention the Bible directly but there is an oblique reference to its influence in his concluding statements about the important principles of evolution encapsulated by Darwin in his 1859 book, On the Origin of Species.
"Darwin's great insight revolutionised the way in which we see the world ... But above all Darwin has shown us that we are not apart from the natural world – we do not have dominion over it. We are subject to its laws and processes, as are all the other animals on earth to which indeed we are related."
Sir David has received hate mail from viewers upset that he does not give God credit in his nature programmes and some correspondence from creationists makes him angry.
"Evolution is not just a theory, as many a correspondent writes to me and says. It is a historical fact like any other historical fact and as certain as William the Conqueror landing in 1066, except it's more certain because the evidence for it comes from a much wider range of fact," Sir David said.
"All we have to tell us about William are a few bits of paper here or there – not very much at all. For evolution, we have much more evidence," he said.

David Attenborough is right to talk about the influence of the Book of Genesis on our relationship with the rest of creation, for the first book of the Bible is the foundation of the theological account of humanity's relationship with the land. It is a story of the struggle for survival, of a people for whom the desert was very close and very threatening.

But the idea that you survive by treating the world as if it is dispensable and only there for our purposes is to misunderstand was is meant in scripture by "dominion". If you go back to the roots of that term you find that it means a kingly rule of the kind bestowed by the shepherd-king David. It means rule in God's image, a pastoral rule of great care. In other words, stewardship.

Stewardship means responsibility. It means acting like Noah to preserve the animals threatened with flood. Increasing numbers of Christians today are rethinking their relationship with the environment, with God's creation. This planet is not ours to use and abuse. It is to be tended, helped to blossom and to be fruitful. Otherwise we will indeed turn the world into a desert.
Posted by Herrad at 11:58 AM

I just watched the BBC Darwin special that this article is linked to.
Great to have science being treated seriously and in way people can relate to. Sir David is a treasure.
I understand the hate squad of religous bigots end the man hate mail. He responds with argument and evidence.