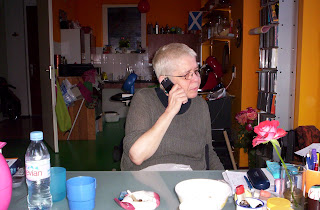 Well finally it happened I got my first catheter yesterday, something which has filled me with panic.

That is until I heard from someone else how easy it was and how much more freedom I would have.

Still I was scared and when the doctor and her assistant arrived I began to talk and talk and talk and had loads of questions.
Finally all questions were answered and there was nothing left to but to let the doctor do her stuff.
I had taken a pill to relax the uretha and the doctor inserted the catheter in seconds.
Strangely enough the insertion was nothing like I thought it would be all the anticipation was worse than the reality.
A few hours after getting the catheter inserted I started getting very sever spasmes which is not so nice especially as I was hoping to be more mobile.
These spasmes are worse than I have had up to now these flip me over the back of the chair in a second.
In fact I just about managed to phone my neighbour Willes in the nick of time as I was flipping over backwards.
Scary stuff, have to always make sure that there is someone around who can pull me up again.
Posted by Herrad at 8:50 AM

Oh, Herrad, I never wanted you to get a catheter - UTIs and so on. I have been inspired by your persistence with nappies.

I am in London with PPMS (primary - is that your type?) and have long enjoyed/empathised with your posts. I need the friendshhip of your blog. Am trying to write my own - spending too much time drafting! Will let you know when I publish.

I am so sorry to hear you are suffering again. These spasms of yours are too awful (I'm not in the chair permanently yet and don't get them like you do - touch wood!).

Take care, Herrad. I'm glad you have family and friends (they seem more cold here). You are in my thoughts and prayers.