Lovely on the drawingboard but not to live in!! 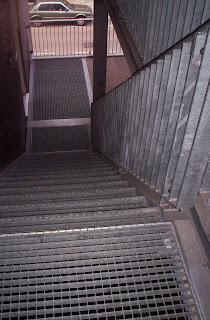 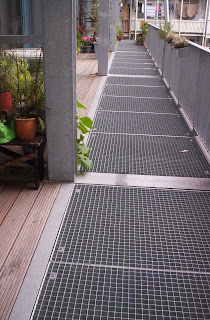 Because the architect never thought about how it would be to live in his wonderful building.

Can just see it there he is at his pc creating this wonderful hi tech industrial look andd never gave a thought to what it would be like to live with balconeys, steps and landings made of metal grids.

Never thought about it being slippery when it rains or there is ice and snow and people falling down the steps.

The housing company (formerly council, until they were split up privatised) never thought about anything apart from profiting from subsidies when they decided to allocate four flats for the handicapped people and 5 flats as sheltered housing.

The flats for the handicapped are supposedly specially for people in wheelchairs but apart from wider doors there is nothing they have provided or us. All adaptions are done and paid for by the council.

So a big whack of subsidy for the company and all they had to do was provide the flat the council had to install bathroom/kitchen etc. Wonderful for them less so for us as it takes ages to get all the things you need.

Took 7 months for them to put 2 strips down to make it easier for me to roll into the bathroom on my one. This mamoth job took one man 5 minutes, two months before two men came round to install to extended tap handles it took them seconds, took 5 months of waiting!

Finally got one electric door opener for our front door after 6 months took two men all day, one did nothing apart from smoke and watch his colleague and worry us as we heard him ask the one installing the door opener "Ever done this before?" To which he responded "No, never, have you? "No said he. Brilliant and so confidence inspiring!

As is the fact that cos they only decided after the building was completed to allocate four flats to people in wheelchairs they did not make a fireproof lift so if there is a fire there will be no chance of a quick escape.

Mind you where would you go? Out onto the balconey and on to the metal walkway I guess in an emergency I won't mind the grids triggering off spasms!