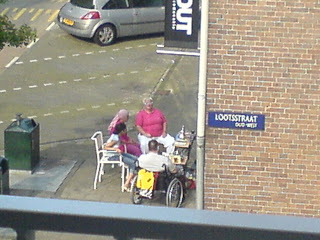 We have really lovely neighbours, today Rachida who lives down the landing and whom I had met for the first time on Sunday when I popped up to see Willes, came by to ask if it was ok to put some new plants in our plant pots and generally tidy up the balconey for us. Then she said I could roll out and sit outside when I felt like it.
Really amazing anyway after a wee while I could not contain my curiosity and had to go out to have a look at what they were doing. Found Rachida and Deborah both had cleaned the balconey and were potting up plants to replace all our dead plants.
It looked really lovely, its abit odd someone else doing that for us but its so very nice of them and well meant.
Later went down the landing to have tea with Rachida, Deborah and Willes, it was very pleasant indeed. They are three amazing neighbours, the sort I have been wanting for ages.
The only problem is that only the balconeys themselves and from the lift to the front of the building has a wooden surface everything else including the landings and the steps is open metal grid which is quite dangerous. Shoes get caught, dogs can't use the steps, people with sticks also have problems.
Luckily there is wood outside our door otherwise I would not be able to come and go without the most horrible spasms. That for me is the real problem the fact that rolling over this open metal grid triggers off horrible spasms which causes my back to go totally rigid which can flip me out of the chair. So that means I have to have someone with me who can get me sitting properly in the chair again.
Just rolling down for tea with neighbours caused a huge wave of spasms really glad my darling was with me otherwise it would have been more horrible. Bloody frustrating for me not to be able to go where I want when I want. Even more frustrating now I have met the neighbours.
They all agreed that we have to contact our landlord and ask them to come up with a solution.
Posted by Herrad at 3:08 PM

Thanks for your comment on my blog. We had another sandstorm last night as well. You could see a layer of dust clinging in the air...inside the house!