Wow! Not bad this going out. 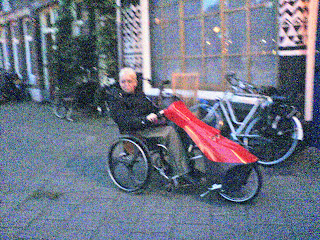 Last night was great going round the block for the first time with the Speedy. Blimey it was almost too exciting, as well as being totally scary.
We only went round the block but it was as eventful as going on safari all those kerbs to be negoiated.

Was pretty glad to get back inside and celebrate my huge journey from the safety of the second floor.
Today we went out about 17.30 only meaning to pop over to the Xtreme (coffeeshop) in the Huidenstraat. The very idea of going what seemed a huge distance had me going quite rigid with fear. All those hump backed bridges and would my left hand be able to use the handbrake?

As it turned out the further away from home we got, the happier I and Richie became. Once I had braved several bridges and we had got to the Xtreme we said lets go further lets go to the
Basjoe.
And we did but I won't go via the bridge by Freddie's bar again the kerbs are dreadfully high a really nasty bump down after quite a high bridge.
Got to the Basjoe feeling quite euphoric, our first time since 6 th of October 2006. Had a lovely reunion with James, hugged and kissed, it was very emotional. So long since we had been there, seems unreal now how long it was. 6th of October I could still hobble abit and could drag myself out of the chair and into the shop.
Later on when it was less busy Leo came out to say hello, he thought the Speedy was great, he loved the colours red and black, as he put it just right for me. Boy how he laughed when he heard I had only just got it on thursday and here it was three days later I was already at the Basjoe
Tonight I sat outside with my Speedy feeling quite the thing I had got all the way to the Basjoe had braved the pain and the traffic and the bridges and all those big kerbs and had a real good Sunday bloody marvellous feel really happy. Can't believe the difference it makes to be able to go outside. Beginning to feel alive again.
Posted by Herrad at 10:44 PM

I can feel your emotions on seeing James and Leo!!!! More trips to Basjoe to look forward to and more happy days to come!