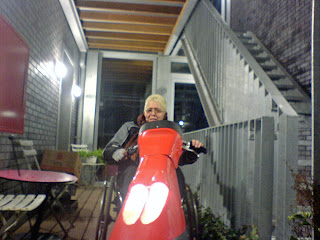 Today started good the sun was shining and summer was back in force. At 10 am Melitta from zorgthuis came to help me go to the toilet and get washed and dressed.

All went well except just as she was leaving I said I think I need to go to the toilet again, but she had no more time, we agreed the incontinence pants would absorb it all very well should I get caught short.

And it did and had the 12 noon person come at the agreed time there would not have been a problem. No one came at 12 so I phoned the coordinator, she told me that someone would be round between 12 and 12.30.

And just like last week and in fact all the other times recently when no one turned up we had a conversation about my bell, and again I told her that my bell was not broken, noone else seemed to have a problem ringing the bell.

Could not believe it when she mailed me last week that it had been a shame for Ingrid that I had not opened the door!

A shame for Ingird? What about me then? She is not the person getting the help and care that's me. Surely if she does not get a response she should ring me as I could have had an accident.

Fancy that eh, you work as a care assistant/nurse and you arrive at a client's home and no one answers the door so you just go away knowing the client is in a wheelchair and can't do anything for themselves

So I sat here patiently waiting and noone came at 12.30 so I called the office again but no one was there all out to lunch.

Then at 13.00 I suddenly started to piss there was nothing I could do about it, it just happened. I had no control and how could I when I had been waiting deserately for hours to go to the toilet.

Called Willes on the 4 th floor and left her a frantic message along the lines of help please bring some old newspapers to put on the puddle on the floor. She was down in a flash with an old sheet.

At 14.00 no one turned up again, this time Willes phoned for me and enquired why no one had come at 12.00 and why no one was ere now? Rona said she can be along any minute if no one shows by 14.30 ring me again.

We did and 14.30 she promised to get someone round as soon as possible. At 15.00 someone came, in fact the person I had seen monday morning and had thought
to see twice on monday but who monday too had just missed me out at 12 noon. Luckily Richie had been here all the other times recently when I had been let down.

Today was horrible, my lovely neighbour Willes's company made it more bearable and at 15.00 a good friend Jeanet turned up as well which was lucky as I had to explain again how to put the lifting harness around me safely.

Poor thing got it wrong time and again, luckily Jeanet was there too and although she had never operated a hoist before she worked out how it all worked and between them got me airborne and washed and dried and wheeled through placed on the bed and between them dressed me.

Glad Jeanet was there and between them it went well. Was recovering in the front room with Jeanet when Richie came home.

After we both recovered abit over a cup of tea and a medicinal j we set off in sunshine for the Vondel park with the dogs. An excellent way to end what had not been one of the better days.
Really enjoyed seeing the dogs run, jump,swim great stuff and suddenly the day got a different character.
Posted by Herrad at 8:32 PM

i am constantly inspired by your amazing attitude amid the difficulties of your daily life. and i am so glad that you have dependable friends and neighbors to come to your aid. thank you for your openness and honesty and your ray of sunshine.