It Was A Strange Day Yesterday. 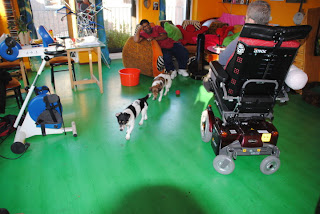 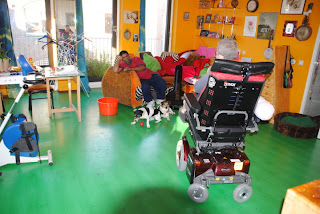 Nur, The Dogs And Me. 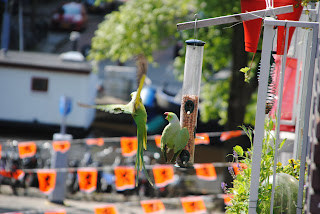 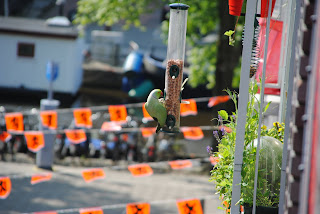 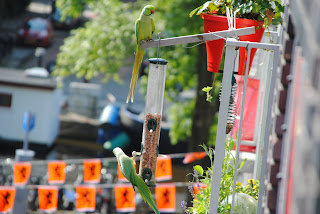 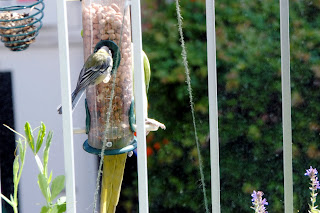 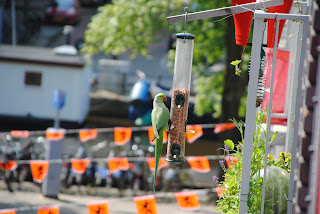 Parrots On Our Bird Feeder. 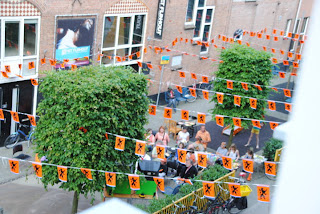 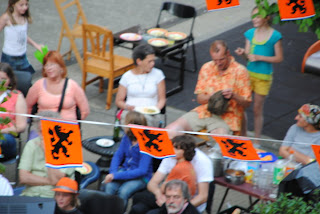 It was a strange day yesterday; not having Richie here with me as usual, despite that it went well.

Nur looked after me well and kept me hydrated and fed,got me THC when I needed it, he was very good and we had a great time together.

Richie kept me informed of his movements, ringing me to let me know that he had got the train to Dordrecht alright as well as getting to the destination on time.

He also rang me after the MRI to let me know that they were leaving; also letting me know when he had successfully caught the train home.

Richie and Spike got home at 7:30 PM, both of them were totally exhausted; Spike was so obviously shattered from the anaesthetic that he slept most of the evening.

Richie told us how worrying it was for him that Spike did not resume breathing independently for 5 minutes after being brought back round from the anaesthetic.

Eventually he started breathing again much to everyone’s relief, especially Richie’s; he also could not walk until they got off the train at Amsterdam Central.

What a terrible day it must have been for the poor little dog, Ritchie said Spike got very worried on the train there; he could not cope with looking out of the window and needed the safety and security of his blanket.

I was so relieved when they both got in last night, also relieved that I had got through a whole day without any problems.

I did not sit right up to prevent myself slipping too much to the right and needing a lot of adjusting, that Nur would not be able to do.

Nur could do small adjustments to my shoulders which were very helpful but he would not be able to adjust me properly had that been necessary.

Luckily that wasn't necessary because of the way I was sitting, this was a big relief for me that I did not need much adjusting.

I was very concerned about someone else moving me around who had no experience doing so.

As they could so easily cause a kink in the catheter tube or worse still inadvertently pull it out, even if it is slightly out of place it would result in a leakage.

This could happen as easily as it did on Monday when the man bringing around the new pump for the bed caused a problem.

He moved the table over my bed very clumsily and it got caught up in the catheter tube and pulled the catheter out of place and I ended up in a urine bath.

We are all feeling pretty exhausted after yesterday, Spike is still sleepy, he probably won’t be 100% until tomorrow.

At the moment the football is on the TV, it is Brazil v Portugal, they seem to have been taking lumps out of each other, wish they would concentrate instead on playing football.

The sun was shining beautifully and the sky was a lovely shade of blue and it was hot enough for me to need the fan to be placed right by me.

Sadly the clouds came over and dimmed the sunshine and right away it is much cooler now and does not look as nice.

But I do not mind I am here with my darling Richie and the dogs and am enjoying Nur’s company.

Going to find some artwork and post this and wish you all a pleasant Friday afternoon and evening.
Posted by Herrad at 5:31 PM

So glad to hear that everything went well. Poor little Spike. I hope the news from his doctor is good.
Peace,
Muff

I'm glad your day with Nur was uneventful and that Richie and Spike made it home ok.

We worry so much about our pets, sometimes more than we do some adults because they are helpless and rely on us so much.

Our doggie is plugging along; the 90 degree plus heat is bothering him alot so our air conditioning electric bill will be enormous this month. But I need the a/c too so he spends alot of time with me in the same room with the a/c.

I think time spent away from a loved one for just one day always makes our heart grow even more fonder (if that is at all possible!) of them and appreciate them even more. I spend a lot of time alone and enjoy it but also look forward to anyone who walks in the door.

Enjoy company - but only when I know they are coming over as I am not always dressed for visitors. :-)

Glad you are doing so much better and that you are adjusting to your Dragon Naturally Speaking.

oh, i'm so glad it went well for you yesterday!
but..."Spike did not resume breathing independently for 5 minutes after being brought back round from the anaesthetic." how scary that must have been! but happy it's all been dealt with!

Hi Anne,
I was relieved the day went well here.
It was horrible for Spike and stressful for Richie.
Glad your dog is doing ok.
You are right we need to look after our pets as they are vulnerable and can't do it alone.
I agree best to know when saomeone plans to come by.
The Dragon software is good.

Hi Muff,
We were relieved the day went as well.
We hope the vet can treat Spike better with the results of the MRI.

Thanks both of you dear friends for coming by.
Love,
Herrad

What a colourful surprise in the night - thank you for that. Nice to see the "hopefull green" floor. Many getting well wishes and a wonderful start into the weekend as well.