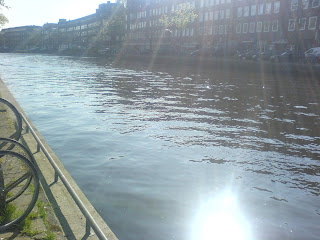 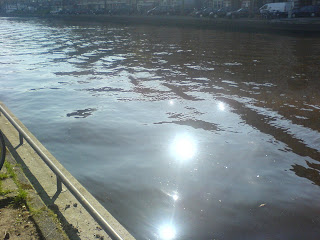 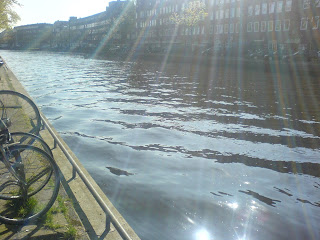 Last night had to wake Richie and tell him that I could not sleep, felt real bad about doing that.

It did help though as he got out of bed and got me two bags of thc vapour which helped me get off to sleep quite quickly.

The next thing I knew was an explosion of kids outside the Fijnhout theatre opposite us.

It sounded like hundreds of children but was probably no more than twenty to thirty, the noise they were making was explosive.

So much joy first thing in the morning was quite wonderful to hear even though it meant the end of sleeping.

Afer the arm exercises the dogs came up on my bed for their morning cuddles this time Marleen first.

She sat quite regally on the bed and enjoyed being petted tremendously Spike was watching enviously but luckily without any vocals.

Then it was his turn whereupon he went into full puppy mode all soft on his back enjoying having his tummy tickled and stroked behind his ears.

It is a privilege to have these two lovely dogs and for them to love and trust us as they do it is very touching.

After they have been on my bed the dogs seem even happier and play with renewed energy round my bed.

Richie massaged my legs while around us Spike and Marleen were playing with their respective toys.

Every now and then Marleen would grab Spike's red ball (his favourite) luckily he seems to have learnt how to tease back picking up her discarded toy and shaking it in front of her face.

Great fun and the massage went double quick because of the entertainment the dogs provided us with.

We have been watching the Animal Rescue Services on Animal Planet, time and time again I am amazed how nice the animals are despite having been treated really badly.

Still the dogs and cats are trusting and friendly and affectionate what amazing creatures, sure I would not be nice if I had been half starved and tied up permanently in a too tight collar that was literally cutting into my neck..

There have been a few of these where dogs were rescued in the nick of time before the dog died of internal bleeding as a result of long term damage from dangerously tight collars and inappropriate ways of tying a dog up.

Horrible stories and brilliant rescues and heart warming stories of cats and dogs being fostered and well looked after and re-homed.

Happy endings are nice and no finer sight than a previously abused animal totally happy with its new home.

Horrible to think what might have happened to Spike had we not re-homed him when we did as he could have become an unpleasant little bully as a result of the neglect and bad treatment plus being dumped as a pup.

We always advocate people re-home dogs and cats rather than buy, as buying keeps the world of dog and cat cruelty alive and flourishing.

Herrad - great photos of sun on the water!

Wonderful to have such love from humans and dogs in the house!

P.S. Apologies to you and Richie - reading your post I realized I mis-spelled Marleen's name as Maureen in a comment on Richie's post about your dogs.

Yes it is wonderful all the love here.

No worries about the name, had not even noticed.

Have a great friday.

Don't worry Cranky: You should hear what I call Marleen sometimes!

I love the photos and the movie one makes it come to life, amazing to see thanks!

I hope you have a good evening, as i write this in the morning, it is sunny here so far.

Herrad- Thanks for stopping in and saying hi. I liked the pictures too.How close do you guys live to the water?

Thanks for coming by real sorry to hear you are tired and fed up.

You take it easy and look after yourself.

Get lots of peaceful times and enjoy the nature round where you live.

I agree that these photos are beautiful and inspiring.

Today was a gorgeous day in DC. Clear skies, blooming trees, close to 80F degrees, birds chirping, with my cats laying in the sun coming through the windows to the floor.

I even sat outside and got some Vitamin D the old-fashioned and natural way. Feels good for the soul. You will be doing the very same, so very soon!!!

Regarding the "banner" on my blog, it is really just text in the header. But....I have tried to make an image of it put that at the top of my blogposts for now.

You should be able to grab that image. I really should play with the sizing. Let me know if that's what you wanted. BTW, you can always take the "Carnival" image too, if you'd like.

I hope that your weekend goes splendidly. :)

I can't imagine getting a pet from a pet store. :( The video I've seen from the puppy mills that make the news is just horrific.

I do believe there are some very reputable breeders out there who take good care of their animals and place them directly with loving families.

but honestly? I can't imagine adopting an animal anywhere but the shelter. And after our last cat died (age 19) of cancer, we adopted a new one from a no-kill shelter. With a young child (I think Ellie was 2), I was thrilled to find a mellow, older cat who didn't mind being around my energetic kid and let Ellie pet her.

And I think it's good that we did, because she had an obvious eye problem at the shelter (although we were told it was an injury that would heal, it's clearly permanent now) and she has some arthritis issues as well. I don't know how easily she would have found a family if we'd passed on her. They estimated she was 8 years old when we adopted her a couple years ago, but I think they may have underestimated.

I cringe at some of the vet bills we've paid for her and wonder sometimes if a younger cat would have been less expensive, but she's so good with my daughter and so loving with all of us that I can't imagine having passed her up.

Ok, I'm rambling, but I wanted to echo what you said about choosing pets from places like shelters and not helping support those puppy mills and other pet mills!

All my pets have been rescue pets. Our three cats were born in the garage across the alley. We had them spayed and neutered and feed them well, but they get no veterinary care - and so far so good.

We also have a rescued Basset Hound from our local animal shelter. We recently lost our Retriever. I'm a big believer in rescuing animals - many of those you find in the shelters are purebreds too.

Those sunshine pictures were very pretty.