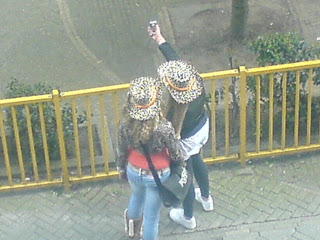 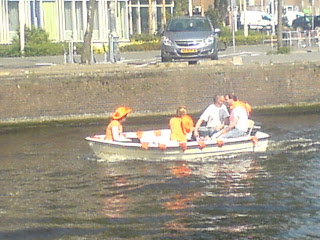 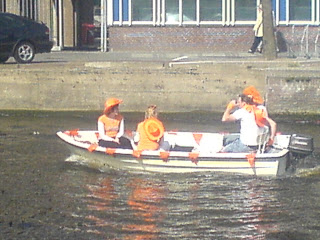 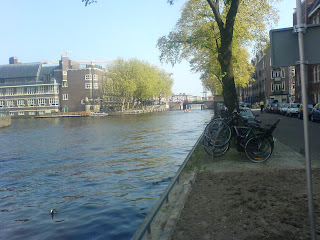 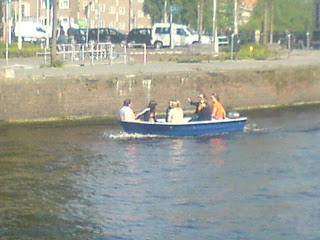 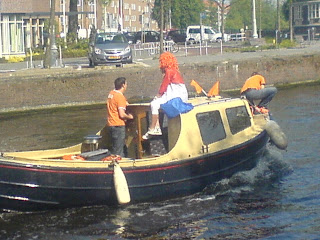 Today is Queen's Day the Queen's official birthday which has been promoted to a big celebration so as to overshadow tomorrow which is May Day.

In England I used to get May Day off here everyone gets the 30 April off work so it has become very popular.

Last night got a taste of Queen's Day courtesy of groups of drunks who seemed to be having great fun shouting and bawling at each other outside our building at about 3 am.

Their fun even went as far as throwing a bottle not at anyone but just it seemed for the happy sound of broken glass.

It is quite a liability to have the books on the side of the house lit up at night as drunken 'art critics' were keen to let the entire neighbourhood know what they thought of them.

Luckily the neighbourhood kids have gone somewhere else today so could get some sleep from about 6am until 10 am and then the boats started to go by.

Each playing music mostly really dreadfully boring music but loud so everyone can enjoy it.

Here there seems to be the idea that if the music is amplified it is good which sadly is very often not true as I can hear only too clearly today.

Some of the boats are playing Amsterdam music but sadly only a couple the rest seem to be playing a two cord loop without any bass which gets louder without building to anything.

Hopefully people will stop riding up and down the canals and go indoors and spare us them getting drunker on the water and playing their favourite tunes even louder.

Every now and then like now I can hear the dull amplified music dimly in the background and a few kids are playing in the sunshine.

It is a really lovely day today which makes a pleasant change hope it does not result in riots outside Central Station like a couple of years ago when it had been an exceptionally hot day.

People had drunk alot of cool beers and when they could not get on trains at Central Station and the police response was instant violence the masses responded in kind.

Think the train company will have learned their lesson and put on enough trains since then.

I shall now get on with enjoying my day and will start by playing some music I like such as The Four Tops, lovely music for a lovely day.

Have a nice day, Herrad!

Hope you have a good day too.

Four tops are perfect happy, running around town or cleaning the house music.

It can never be too loud.

I hope the evening is quiet and that all of the boats with boring music have gone!

Thanks for coming by, good to hear from you.

I shall have a look at your blog now.

Have a good afternoon/evening.

The boats have stopped now and it is very quiet too quiet.

A man tried to ram the Royal party on their tour round Appeldoorn to do this he drove through the crowd killing 4 and injuring 16.

All festivites were stopped in the town.

Really horrible wish now that the boats were stiil going past.

This is terrible to read what happened!

Hi Herrad! I love seeing your photos. I visited Amsterdam in...1991 I think? I stayed at a youth hostel and remember eating yogurt with granola and honey for the first time. The canal boat ride was so pretty...thanks for the memories!

Glad you like the photos.
Which hostel did you stay at?

Have a great friday afternoon and evening.

I have no clue to be honest! It was so long ago...It was on a street facing the canal, but that could be anywhere I suppose!